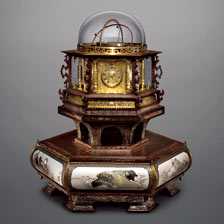 Oumi Daijo was a title reserved only for the most preeminent craftsmen. The meticulous care and expertise poured into this chronometer, one of Hisashige's principal masterworks, makes it clear how much he deserved the honor. It combines a Western timepiece with a Japanese traditional clock, which divides time between sunrise and sunset into six parts.

This creation reflects Hisashige's mindset and methodology -- taking and using Western technology while adapting it to the cultural needs of Japanese society. Recently, Hisashige's technological contributions have attracted renewed attention and re-evaluation. In 2004, Japan launched a national project to disassemble, restore and reproduce the Man-nen Dokei chronometer. 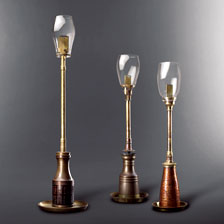 In 1834, 35-year-old Hisashige moved his active base to Osaka. By then, he had discontinued shows using clockwork dolls and started to sell his inventions. His oil lamps were a lifestyle-changing achievement, a home appliance incorporating an air-pressure-pump mechanism that overcame the problems of short-lived, dim light inherent in lighting rooms with lanterns and candles.

Hisashige created seven different models, which he sold to merchants and the general public. In addition to bringing advanced technology into everyday life, Hisashige was also a marketing pioneer who advertised his products in attractive leaflets. 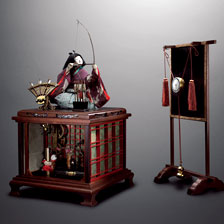 Collection of the Kurume City Board of Education

Hisashige cleverly "programmed" the doll to occasionally miss a shot by including a featherless arrow in the quiver. He recognized that adding this failure factor to his high-precision device enhanced its entertainment value by introducing an element of surprise to the fun. This reveals another facet of Hisashige's success--he understood the need for showmanship.

Collection of the Kurume City Board of Education

Hisashige's strong interest in the then cutting-edge technology of the steam engine is apparent in this 1852 steamboat model. At that time, he lived in Kyoto and experimented with the steamboat on the pond in the grounds of the Takatsukasa family estate.

After Commodore Perry's flotilla of "black ships" steamed into Tokyo Bay to open Japan to the world in 1854, Hisashige made his tests of steam engines into public spectacles. This led to his invitation, at the age of 55, to work with the Saga clan as its chief engineer. As such, he successfully produced models of steam-powered boats and vehicles and also a domestically produced commercial steamboat.

Model of the Buddhist universe 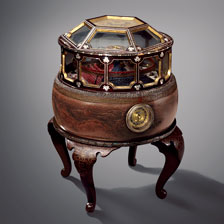 Property of Ohashi Watch; on loan to the Seiko Institute of Horology

In 1837, at age 38, Hisashige left his home in Osaka and moved to Fushimi in Kyoto, where he mingled with scholars of Western learning, science, and mathematics. While there, he studied with the Tsuchimikado family, which was famous for its research in astronomy, and immersed himself in studies of both Japanese and international disciplines.

The extraordinary Shumisen-gi , a model of the Buddhist universe produced at the special request of a Japanese monk, united clock technology with astronomical principles in a complex mechanism that was the precursor of the Man-nen Dokei chronometer.

Property of Ohashi Watch; on loan to the Seiko Institute of Horology 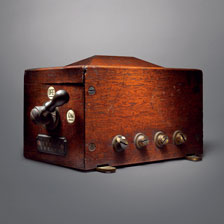 In 1873, five years after the Meiji Restoration, the Japanese government inaugurated a national telecommunications project, and Hisashige, by then 73, was called to Tokyo to provide assistance. Drawing on his success in building a small-scale telegraph for the Saga clan, he founded a company and started domestic production of the Morse telegraph, and also produced the Hoji-ki telegraphic time signal for the government.

A signboard raised in front of the Tanaka Seizo-sho (Tanaka Manufacturing Works) facility confidently announced, "We welcome orders for inventions of all types of machinery." The company was as good as its word, and produced a wide range of products -- including electrical appliances, lathe machinery, watermill equipment, and a mariner's compass -- that contributed to the modernization of Japan.